Really Wild Wildlife is a series of animated stuffed  animals from 2002-2004. Each one is unique in their own way. Some sing songs, some talk, some even make their own animal sounds. Their packages/tags show facts and trivia about the real life versions of the animals in the series.

Spike the Rocking Porcupine-Dances and plays "Everybody have fun tonight"

Jivin' iguana -Dances and plays "Can you move it like this"

-The swinging monkey comes in many designs and forms

-Curious Cow has the same chicken dance recording as Cornelius the Chicken, Choking chicken, and the Chick dancing hamster. 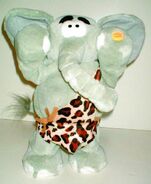 Rappin' croc
Add a photo to this gallery
Retrieved from "https://gemmy.fandom.com/wiki/Really_Wild_Wildlife?oldid=44913"
Community content is available under CC-BY-SA unless otherwise noted.