The Life-Size Michael Myers is an animatronic line produced by Gemmy in 2009-10, and was reincarnated in 2020.

The original 2009 version is based on Myers' appearance from Rob Zombie's 2007 remake of John Carpenter's "Halloween" (1978). It has on an old gray mask and stained brown jumpsuit. It was exclusively sold at Spirit Halloween in 2009.

Gemmy remade Michael Myers for 2020. He sports a brighter blue jumpsuit and a shiny plastic mask with his eyes visible. The arm holding the knife moves up and down as it plays the "Halloween" theme.

Both of the initial versions share the same hand, feet, and knife sculpts, and are functionally identical. When activated by the button or motion sensor, the heads and eyes move left to right and raise and lower the arm holding the knife while the "Halloween" theme plays against Michael's heavy breathing. 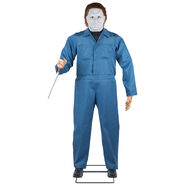 Retrieved from "https://gemmy.fandom.com/wiki/Life_Size_Michael_Myers?oldid=56954"
Community content is available under CC-BY-SA unless otherwise noted.