Fright Lights were Halloween props made in 2007. When activated, the candle(s) would light up and they would speak one of several phrases. They are sound/motion activated.

There were three variations of the Fright Lights:

Skull variant on the box 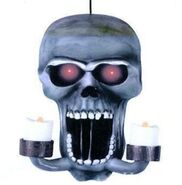 Fright Lights-Skull Wall Sconce
Add a photo to this gallery

Retrieved from "https://gemmy.fandom.com/wiki/Fright_Lights?oldid=52515"
Community content is available under CC-BY-SA unless otherwise noted.