The Freaky Geeks are a series of animated dancing Halloween characters produced for the 2004 and 2005 Halloween seasons. Each one is dressed in a similar purple-themed style and dances to a classic pop song. Freaky Geeks move their heads and dance, while the mouth moves and eyes illuminate. Both the Skeleton and Witch swing their hips and turn their heads, while the Monster leans his body and pivots his head.

Three Freaky Geek prototypes are known to still exist. All three of which are Monsters. There are two production sample Monsters that are nearly identical to each other and one other Prototype "Deluxe" Monster that has much more noticeable differences. The main differences are it's increased height and large silver base. In addition, pictures of very early prototypes of the Monster, Witch, Variant Skeleton and Variant Monster have been recovered. The fate of these prototypes is unknown.

Freaky Geeks Monster Sample 2
Add a photo to this gallery 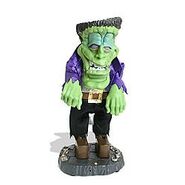 Canadian Monster's French Demo Sticker
Add a photo to this gallery
Retrieved from "https://gemmy.fandom.com/wiki/Freaky_Geeks?oldid=55111"
Community content is available under CC-BY-SA unless otherwise noted.