Start a Wiki
Buck the Animated Trophy is a singing wall-mount taxidermy head of a white-tailed deer made in 2005. He sings six songs: "Friends in Low Places" by Garth Brooks, "La Grange" by ZZ Top, "On the Road Again" by Willie Nelson, "Rawhide" by Frankie Laine, "Suspicous Minds" by Elvis Presley, and "Sweet Home Alabama" by Lynyrd Skynyrd. He also tells jokes as he moves his head and mouth to the words and wiggles his ears up and down. The large version of Buck also came with a microphone that you could speak into and he would move his mouth along with your voice, and a remote control that allows you to control Buck's head, ears, mouth, and the songs he sings. He also came with an auxiliary jack that allowed him to sing other songs.

On the Road Again Edit 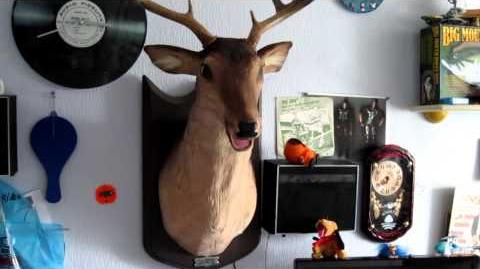 Buck The Singing Deer-0
Buck the Animated Trophy in action

Mini Buck
Add a photo to this gallery
Retrieved from "https://gemmy.fandom.com/wiki/Buck_the_Animated_Trophy?oldid=56757"
Community content is available under CC-BY-SA unless otherwise noted.