The Big Mouth Candy Bowls are a series of animated Halloween decorations made in 2002 and 2020. Each one has an open mouth with teeth showing. When activated, the teeth wiggle as the eyes light up while the character says phrases. Several versions were non-animated but had handles on the back to be used for collecting candy and featured lighted eyes. An additional witch version was made that features a giant moving nose. New versions of the witch and pumpkin were produced for 2020. These versions are able to hang on a wall as well as stand and have lighted eyes. Not much else is known about them yet however. 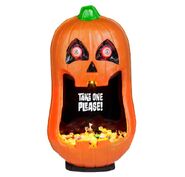 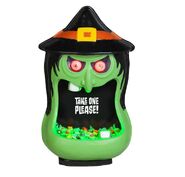 2020 Witch
Add a photo to this gallery
Retrieved from "https://gemmy.fandom.com/wiki/Big_Mouth_Candy_Bowl?oldid=54222"
Community content is available under CC-BY-SA unless otherwise noted.